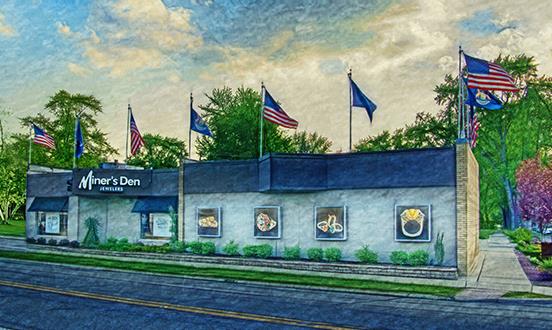 Miner's Den was founded in 1971 at its present location in Royal Oak Michigan. With a family history dating back to the California gold rush of the 1800's, the Miner's Den offers unparalleled knowledge gathered from generations of experience. We maintain a collection so vast we truly have something for the person who likes the unique and different. Beginning with a few tons of rock in 1971 the Schowalter family has built the Miner's Den into one of the leading suppliers of jewelry in the area. With a 4,000 sq. foot showroom, one can view our entire inventory in a comfortable and relaxed atmosphere. The rest of the story..

Will Walker...Dad called him "Uncle Will" staked his claim on Rattlesnake Hill during the second great California Gold Rush in the early 1900's. Owning nothing but a spunky old mule, Bluebell, and the most rudimentary mining supplies, Uncle Will struck it big in the mountains near Chico. With a fistful of nuggets from his mine, Uncle Will staked himself to eight prime properties in San Francisco and roared through the Twenties on his rental profits. When the Great Depression left him penniless, Uncle Will still considered himself a wealthy man... he had more than most - a trusted companion, Bluebell, and a rich and hope-filled lifetime ahead of him, living out his days, searching for the elusive metal on Rattlesnake Hill. Just as Uncle Will's claim has remained in the family, the Mining Bug has bitten every generation since.

For a young college grad in the booming Midwest, the prosperity of the Post War years held a world of promise, but Dad sought his new frontiers on more rugged horizons. With a school-chum, he headed West where they met the old prospectors of Death Valley; worked banana boats up and down the coast; visited the mining camps near Uncle Will's old claim; then hopped "Wrong Way" Corrigan's ramshackle airlift from Frisco to Fairbanks to sign-on with The American Smelting and Refining Co.

First they served as operators on huge, barge-like dredges that chewed up the frozen tundra tracts and spit-out raw earth behind, digesting its precious gold ore. Later they served as human watchdogs over a pile of A.S. & R. gold in a remote cabin on the desolate Alaskan plain, where there was nothing to do but sock-away their paychecks and plan for the day they would file their own claim.

Once they built-up a grubstake, they mined the Alaska Territory on their own for a season, but the only treasure they unearthed was the tusk of a Wooly Mastodon - a curious souvenir with which to impress the family and folks back home when Dad took a well-earned vacation from his Wanderlust.

As much as Dad savored the rugged and adventurous prospector's life, a stronger passion held him in the palm of this giant mitten that the glaciers carved... True Love. He stayed. He took the job he had declined before. He took the hand of the woman who had taken his heart and he passed his abiding love of the Earth and its treasures on to his children.

Together they foster that love in...